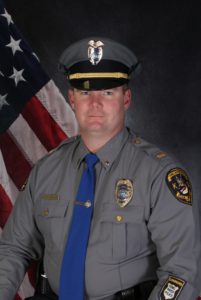 We’d like to congratulate Captain Dellane on his promotion to Captain on February 1, 2021!

Captain Patrick Dellane is a lifelong resident of Toms River.  He graduated from Richard Stockton College of New Jersey with a Bachelor Degree in Criminal Justice and received a Master’s in Administrative Science from Fairleigh Dickinson University.  He began his career with the Toms River Police Department in 1995.  As a Patrol Officer, Captain Dellane served as a Field Training Officer and was assigned to the Emergency Services Unit (ESU) as a Chemical Munitions Instructor before being assigned to the K9 Unit with his partner, Clancy.

Captain Dellane was promoted to Sergeant in 2009 and served as a Squad Sergeant on all three shifts, and as an ESU Supervisor, before being assigned to the Professional Standards Bureau as the Training Sergeant.  He was promoted to Lieutenant in 2015.  As a Lieutenant, Captain Dellane worked in the Community Affairs and Professional Standards divisions.

In 2019, Captain Dellane graduated from the FBI National Academy #275 Session.  He has served various positions with Toms River FOP #156.  Captain Dellane is currently assigned as the Commander of the Criminal Investigations Bureau.

Captain Dellane would like to thank his wife Patty and son Patrick for their love and support.