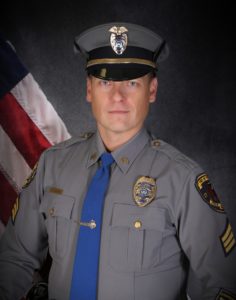 We’d like to congratulate Lieutenant Bachonski on his promotion to Lieutenant on February 1, 2021!

Lieutenant Eugene Bachonski is a 1997 graduate of Rutgers University where he earned a Bachelor of Science degree in Business Economics. He joined the Toms River Police Department in 1999 and attended the Ocean County Police Academy, Class #72.

In 2002, Lieutenant Bachonski was assigned to the department’s Traffic Safety Unit as a patrolman where he had the opportunity to investigate serious and fatal crashes, proactively enforce and educate traffic violations, and work with the Ocean County F.A.S.T. Team. He is a certified Emergency Medical Technician and has attended numerous crash investigation related training and schools.

In 2012, Lieutenant Bachonski was promoted to Sergeant and was assigned to Special Operations where he led and supervised the Traffic Safety Unit and applied for, scheduled and organized multiple grants. He also planned and acted as lead supervisor for several Township events including, but not limited to, FoodFest, Memorial Day Parade, Summer in the Street, Harvest Fest and the Halloween Day Parade.

In 2018, Lieutenant Bachonski was assigned to the newly formed Community Affairs Division and was integral in helping create the SLEO3 program which placed a retired police officer in each Toms River school. He coordinated the Neighborhood Watch Program and spoke at various community meetings to develop a strong relationship between the Police Department and citizens of Toms River.

Lieutenant Bachonski is married to the lovely Raquel Bachonski and is father of two beautiful and talented girls, Alexa and Maya. He thanks them and his mother, JoAnn, for their continued support.

Lieutenant Bachonski is currently assigned to the Community Affairs Division.