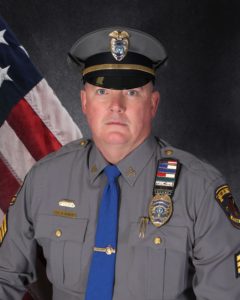 We’d like to congratulate Lieutenant Rankin on his promotion to Lieutenant on February 1, 2021!

Lieutenant Rankin was promoted to the rank of Sergeant in 2011 after serving one year in an “acting” capacity. As a Sergeant, he was assigned to the Patrol Division for 5 years and the Administrative Bureau for 5 years. As an Administrative Sergeant, his areas of responsibility included the on-site building manager, fleet manager, and Quartermaster. Additionally, he oversaw the Department’s Information and Technology unit and radio systems.

Lieutenant Rankin is currently assigned to Special Operations where he oversees the Department’s specialty units including Traffic Safety, K-9, Motorcycle, Marine, and Dive Team. Additionally, he is serving as the Commander of the Emergency Service Unit.

Lieutenant Rankin would like to thank his wife, Ruth, and children, Michaela, Cael, and Michael for their continued support throughout his career.