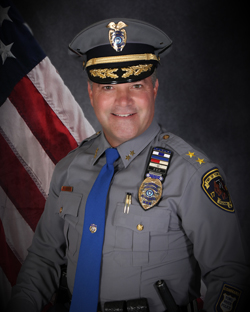 Chief Mitchell A. Little is a lifelong resident of Toms River who graduated from Toms River High School North in 1982, Stockton State College with a Bachelor Degree in Criminal Justice in 1986 and Fairleigh Dickinson University with a Master’s Degree in Administration in 2005.

Inspired by his father, who rose to the rank of Deputy Chief of the Toms River Police Department, Chief Little began his career with the Toms River Police Department in 1986. In his first year as a police officer, Chief Little was named Ocean County Police Chief’s and Fraternal Order of Police Officer of the Year for his actions involving a motor vehicle accident. He served as a member of the department’s Emergency Service Unit for 10 years. He is a 5th Degree Black Belt in Korean Tae Kwon Do and a 3rd Degree Black Belt in Japanese Karate Wadu Ru and 3rd Degree Black Belt in Japanese Jujitsu. He developed the department’s defensive tactics program as well as the defensive tactics program at the Ocean County Police Academy, where he taught for 10 years and was a six time recipient of the “Instructor of the Year” award.

Chief Little became a Sergeant in 1997 and later formed the department’s motorcycle unit. In 2001 he rose to the rank of Lieutenant and commanded the Special Operations Unit. During the same year he successfully completed the Northwestern University School of Police Staff and Command. In 2008 he was promoted to the rank of Captain and served as the Administration Bureau Commander until his appointment to Chief on January 1, 2014.  He currently serves as an Adjunct Professor at both Kean University teaching Police Supervision, Criminal Law and Juvenile Justice and Georgian Court University teaching Sociology, Criminal Justice and Juvenile Justice.  Chief Little serves on various advisory boards including; CASA of OC, Salvation Army, Big Brothers and Big Sisters, OC Human Services Advisory Council, Ocean Mental Health, TR Youth Advisory Council and Ocean County College Criminal Justice Advisory Board.

During his tenure as Chief, the department has instituted various programs including:

Chief Little has been married to his beautiful wife Lisa since 1992 and has 2 wonderful children.

Chief Little can be reached by email at chief@trpolice.org